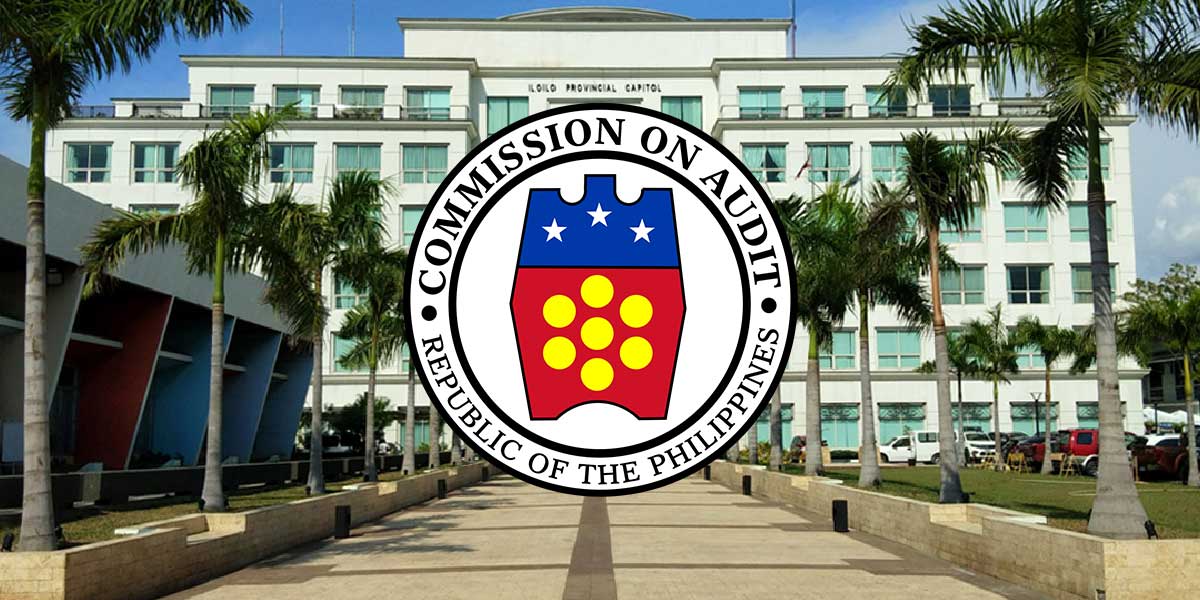 The Commission on Audit (COA) in its annual audit report for 2020 noted the improper accounting of donations to the Iloilo provincial government for its coronavirus disease 2019 (COVID-19) and typhoon relief programs.

The provincial government’s annual audit report became available to the public via the COA website on July 1.

In the report, the COA questioned the lack of due accounting and reporting of in-kind donations estimated to have cost P17.12 million, consisting of:

State auditors noted that while P15.37 million was supported by acknowledgment receipts (AR) controlled by the Provincial Disaster Risk Reduction and Management Office (PDRRMO), there was no AR of the remaining P1.74 million which was received by the Hospital Management Office (HMO) from 25 donors.

HMO personnel told COA in its inquiry that these donations were not reported to the PDRRMO because of “busy schedules in facilitating the needs and requirements of the district hospitals to address the COVID-19 pandemic”.

The COA also went on to say that the purpose of donations through the HMO were defeated as some of them were already damaged upon turnover.

The PDRRMO reported that it had received P15.67 million worth of in-kind donations and distributed up to P15.60 million, leaving a balance of P69,570.

But verification by the COA showed that the PDRRMO received less (P15.37 million) and distributed even less (P12.34 million), with a balance of P3.03 million.

The balance reported by the PDRRMO was also further disputed, as a physical count of the on-hand inventory resulted in a total of P90,750.00 in value.

This resulted to a discrepancy of P2.96 million between the PDRRMO’s report and the COA’s verification.

The COA observed errors in recording the received donations, and no amounts indicated in the invoice receipts. There was also noted difficulty in assigning the unit cost for the items distributed because the unit of measurement was inconsistently used.

Some of the items distributed were also unsupported by either an issuance form, an invoice receipt, or other proof of distribution, but were still included in the PDRRMO’s report.

Confusion as to the extent of accountability of implementing offices also arose as the donations handed down to local government units (LGUs) in the province were coursed through the Provincial Social Welfare and Development Office (PSWDO) instead of direct turnover.

The COA stated that these observations were contrary to their Circular No. 2020-009 and the provincial government’s Memorandum Order (MO) No. 17, series of 2020.

COA Circular No. 2020-009, which temporarily relaxed the rules on disaster-related donations and funds under Circular No. 2014-002, mandates agencies to submit a summary or list of donations supported by acknowledgement receipts, proof of receipt and distribution to beneficiaries, and inventory of remaining undistributed items.

MO No. 17, series of 2020, issued by Iloilo Governor Arthur Defensor Jr., rationalizes the distribution of relief goods, personal protective equipment and other medical supplies and devices donated to or purchased by the provincial government.

The MO states that:

“The above circumstances showing gaps in the system and logistics indicated non-compliance with both the MO and COA Circular.  Thus, the accounting, monitoring and reporting of the said donations were not properly carried out, which resulted in inaccurate report, unaccounted receipts and issuances of donations.  The completeness of the items and accuracy of the stated amounts were not fully warranted as it was based only on available records,” the report stated.

The COA noted that the provincial government has provided them guidelines on the distribution of in-kind donations, as well as flowcharts on the receipt and utilization of the national Disaster Risk Reduction and Management Funds (DRRMF) and in-kind donations and aid from local and foreign sources.

The HMO, in reply to an Audit Observation Memorandum (AOM), has started assessing and reviewing documents in relation to donations without acknowledgment receipts and determine why these weren’t coursed through the PDRRMO.

The COA recommended the PDRRMO to coordinate with the Internal Audit Service and other implementing offices in the provincial government to improve procedures, considering accountability and transparency.

The PDRRMO and other implementing offices were also mulled to observe the use of forms and receipt and issuance of in-kind donations in accordance with COA Circular Nos. 2020-009 and 2014-002, for proper accounting of the donations.

There were no further comments from the provincial government, and the COA noted that the recommendations they had made were agreed to.

Another inconsistency pointed out by the COA was the non-submission of the quarterly summary of donations received, distributed, and balances to the National Disaster Risk Reduction and Management Council (NDRRMC) via the Office of Civil Defense (OCD), as well as the untimely posting of these summaries to the provincial government’s website.

COA Circular No. 2014-002 requires the local government agencies with cash donations received from both local and foreign sources to submit the Report on the Receipt and Utilization of Cash Donations to the NDRRMC through the OCD, five days after the end of each month.

The said Circular also requires submission of the monthly reports on the receipt, distribution, utilization, and issuance of in-kind donations, within ten days after the end of the month, until all donations are fully consumed or utilized.  The COA Auditor should also be furnished a copy of these monthly reports.

The required reports on the receipt and utilization of cash and in-kind donations should also be posted in the official websites of the implementing agency.

But the COA’s review showed that the provincial government did not submit quarterly reports but a one-time Summary/List of Donations Received, Distributed and Balances as of December 31, 2020 was submitted thru email to the OCD last February 1, 2021. The list only included in-kind donations and not cash donations.

As to posting requirements, only reports from January to June 2020 were posted on the provincial government’s website.

Likewise, there were no separate reports for cash donations which were received and utilized. Instead, these appeared on the Local DRRM Fund Utilization Report, which was also posted in the website and only up to the third quarter as of the date of the audit report.

This, despite P1.075 million of cash donations for Typhoon Ursula and the COVID-19 pandemic were left unutilized by the end of 2020.

The PDRRMO’s focal person told COA in response to its inquiry that the non-submission of quarterly reports and delayed posting of reports on the website were “due to hectic workload caused by COVID-19 pandemic.”

The COA remarked that as a result of the non-submission of the reports as well as the delays in the posting, stakeholders and the general public were not duly informed of the status of donations.

“Reporting the status of donations will enhance transparency that had been an issue of considerable importance for the donors, stakeholders and the public.  This will also provide them the necessary information on the utilization and balance of donations, which could be used for making decisions or for other purposes.  Hence, the IPG’s management should endeavor to regularly submit and post the required reports,” the COA said in its report.