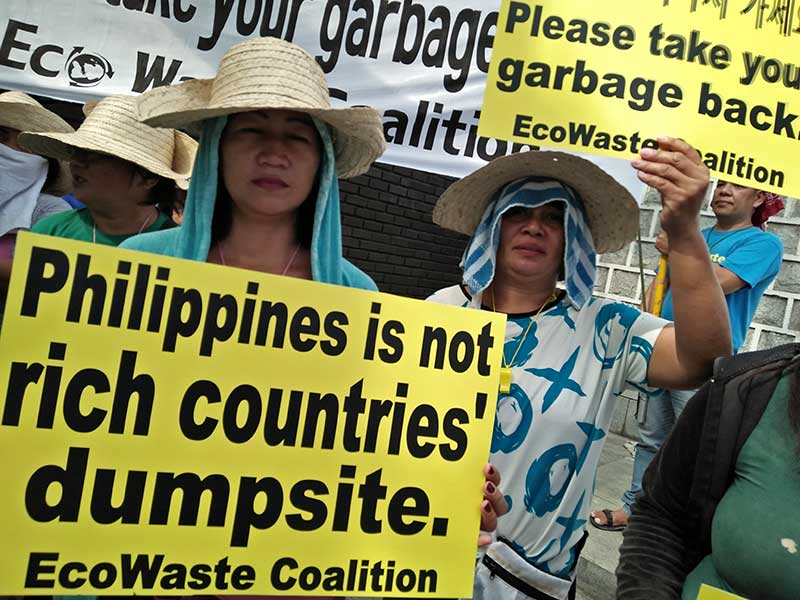 With his six-year term drawing to a close on June 30, environmental health and justice groups urged President Rodrigo Roa Duterte to rush the government’s long overdue ratification of the Basel Convention Ban Amendment.

The Ban Amendment, adopted by the parties to the Basel Convention in 1995 and which finally entered into force in 2019, prohibits the export of hazardous wastes for recycling or disposal from rich countries to developing countries like the Philippines.

Despite falling victim to foreign waste dumping incidents, including high profile scandals involving contaminated plastic wastes from Canada and South Korea, the Philippines has yet to ratify the Ban Amendment and prohibit waste imports.

“PRRD should not miss the opportunity of leaving a lasting legacy by decisively fixing glaring policy gaps to protect our people and the environment from the relentless threats of exploitative and unjust trade in hazardous waste and other wastes,” said Aileen Lucero, National Coordinator, EcoWaste Coalition.

“With the clock counting down, we appeal to the President and his Cabinet to hurry the ratification of the Basel Convention Ban Amendment and enforce a complementary total ban on foreign waste imports to uphold environmental justice and human rights. If not now, when?” she added.

“In the final months of his presidency, President Duterte can demonstrate his commitment to protecting Filipinos and our environment by securing the Philippines’ ratification of the Basel Ban Amendment. This move will prevent the entry of hazardous wastes from 38 OECD nations, some of which have been sending to the Philippines for years,” said Marian Ledesma, Zero Waste Campaigner, Greenpeace Southeast Asia-Philippines.

“This is also a chance for the Philippine government to show strong leadership alongside other Asian nations who have closed their borders on imported waste and to respond to the exploitation of Global South countries in the waste trade,” she further said.

In its response last September 2021, the government through the Department of Environment and Natural Resources – Environmental Management Bureau (DENR-EMB) told the EcoWaste Coalition that it has initiated the conduct of the cost-benefit study for the Philippine ratification of the Basel Ban Amendment.

“The study has shown the overall beneficial impact of the Ban Amendment in the Philippines, where the long-term financial, environmental, and social benefits outweigh the short term-costs,” wrote EMD Director William Cuñado, who also said that DENR is “getting the requisite Certificates of Concurrence from the different stakeholders to facilitate the ratification process.”

“We’re keeping our fingers crossed that President Duterte will ratify the Basel Convention Ban Amendment and have it immediately transmitted for Senate concurrence,” the EcoWaste Coalition and Greenpeace said.

“After review of the EMB Policy Technical Working Group, this will be forwarded to the DENR for final review and endorsement to the DENR Secretary. We hope that the amended DAO will be approved this year (2021),” Cuñado said.

As of today, the DENR has yet to promulgate the amended regulation.