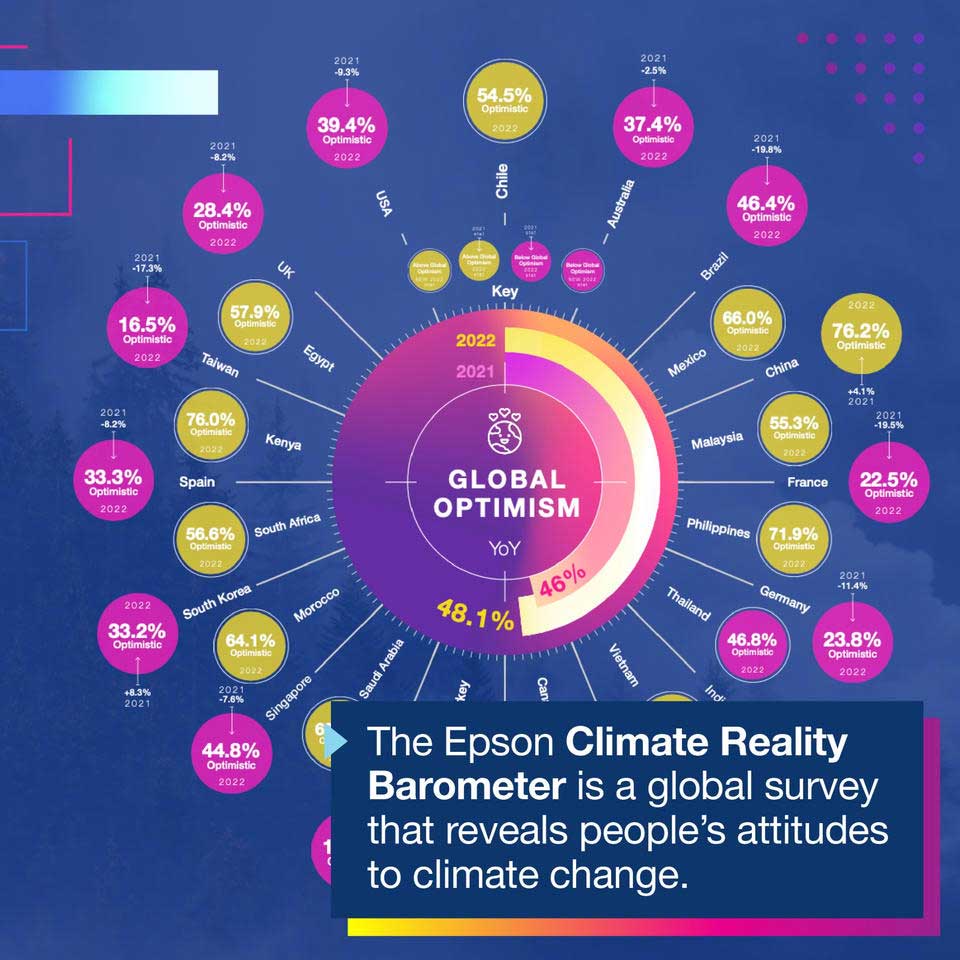 The Philippines is uniquely vulnerable to climate change, with the country ranked as one of the nations most affected by extreme weather events.

Despite this, awareness and action towards the climate crisis is moving at a glacial pace, as reported by Epson in its 2022 Climate Reality Barometer.

The global technology leader has recently released its annual Global Climate Reality Barometer, which surveys a diverse group of people from different backgrounds to gain a deeper understanding of climate change perception.

In the Philippines, the survey was conducted online and distributed to over 1,000 Filipino consumers.

Local findings presented how attitudes and awareness are changing as the climate crisis unfolds, but slowly and inconsistently.

To better understand and address gaps in climate change perception and awareness, Epson has outlined key findings and insights in the Philippines.

In the second half of 2022, the mayor of Makati declared a state of climate emergency as temperatures and sea levels continue to rise, making cities more vulnerable to strong typhoons that bring floods and landslides.

Despite this, over half (52%) of Filipinos surveyed as part of the Climate Reality Barometer, believe that rising prices and administering policies to boost the economy are the most urgent concerns that governments, companies, and citizens around the world should be focusing on.

When it comes to individual actions, the Philippines is still trailing behind in efforts compared to its regional neighbors. Less than a quarter (17%) of respondents in the Philippines have switched to an electric vehicle to tackle climate change, compared to 45.8% in Vietnam and 40.9% in China.

Insights on reality, influence, and action

While growth in perception is slow, various efforts to mitigate the climate crisis are already being executed on the individual-scale. In the Philippines, Epson has reported the top three actions citizens are already carrying out: 1) Reducing plastic use (76.5%), 2) improving recycling habits (70.1%), using more reusable goods (69.2%).

While individual actions are starting to ramp up, it is clear that more needs to be done—on a larger scale. In the Philippines, Epson reported that these three categories hold the most impact on citizens, and are considered key drivers for change and climate action: 1) government policy changes (42.4%), 2) influencers and key opinion leaders (39%), 3) personal experience such as witnessing the impacts of climate change (37.1%).

A shift in priorities—pushing for more effective climate action

Governments, corporations, and citizens must shift their priorities to addressing the climate crisis while they still can. To meet climate change targets and avoid worsening the already irreversible damage to the environment, governments need to develop policies for sustainability, businesses need to develop sustainable policies and solutions, and individuals need to build awareness and accelerate lifestyle changes.

“The 2022 Epson Climate Reality Barometer shows progress—but also how short-term economic demands are in danger of distracting governments, businesses, and individuals from imperative environmental action,” said Masako Kusama, president and director of Epson Philippines. “As a global technology leader, our duty is to refocus our efforts on developing solutions which will help reduce the environmental impact of our products. By working together, we at Epson believe that we can all inspire action and build a better future.”