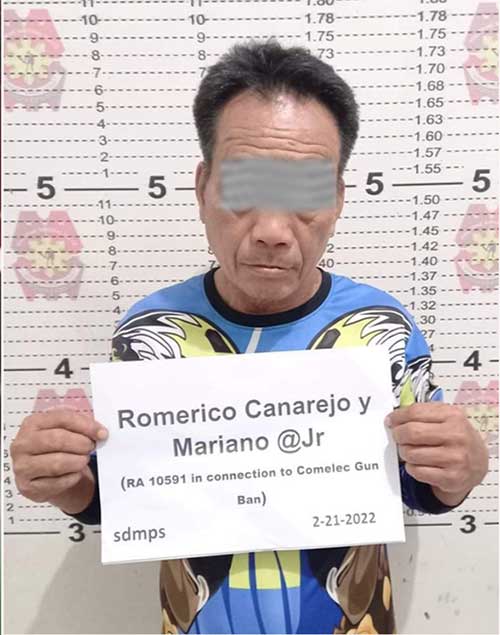 A village official reported to the police station that Canarejo threatened the minor with an unknown caliber of firearm.

When police responded, they saw the suspect tucking a caliber .45 pistol in his waist. The gun has one magazine and three ammunition.

The suspect was subsequently detained and will be charged for violation of Republic Act 10591 (Comprehensive Firearm and Ammunition Regulation Act) and COMELEC Resolution No.

As of Feb 20, Police Regional Office (PRO)-6 records indicated that 83 persons were arrested for violation of Commission in Elections (Comelec) Resolution 10728.

Aklan arrested 10 individuals; Antique with 3; Capiz with 4; Guimaras with 1; Iloilo Province with 15; Negros Occidental with 36; Iloilo City with 6; and Bacolod City with 8.

Under Comelec Resolution No. 10728 promulgated on Nov. 10, 2021, “no person shall bear, carry or transport firearms or other deadly weapons outside his/her residence or place of business, and in all public places, including any building, street, park, private vehicle or public conveyance, even if he/she is licensed or authorized to carry the same, unless authorized in writing by the Commission, through the Committee on the Ban on Firearms and Security Concerns (CBFSC).”

And yes, the prohibition covers the use of airgun and airsoft guns.