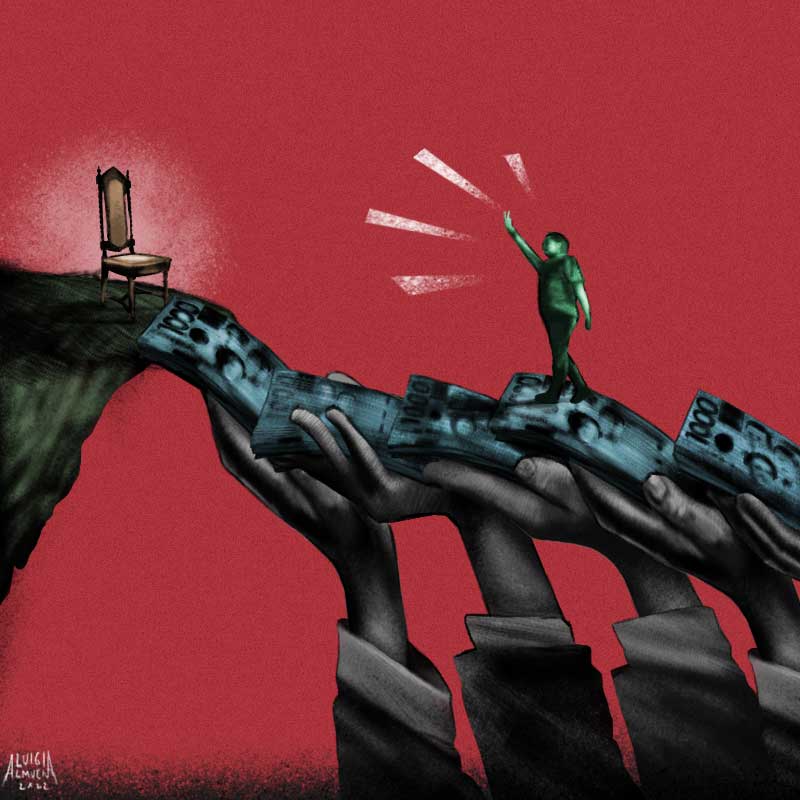 By Karol Ilagan and Martha Teodoro

In the Philippines where money typically defines electoral victory, Sara Duterte stands out for securing a national post without spending any cash, based on her own disclosures to the Commission on Elections (Comelec).

While nearly all of her opponents in the race for vice president reported using their own money to fund their campaigns, Duterte did not shell out a single peso or receive any cash donation.

She only reported receiving in-kind donations amounting to P216 million. They came from three political parties, two senatorial candidates, and a Davao-based realty firm, her Statement of Contributions and Expenditures (SOCE) for the May 2022 elections showed. (Explore the data: How the candidates for vice president spent in the May 2022 polls) 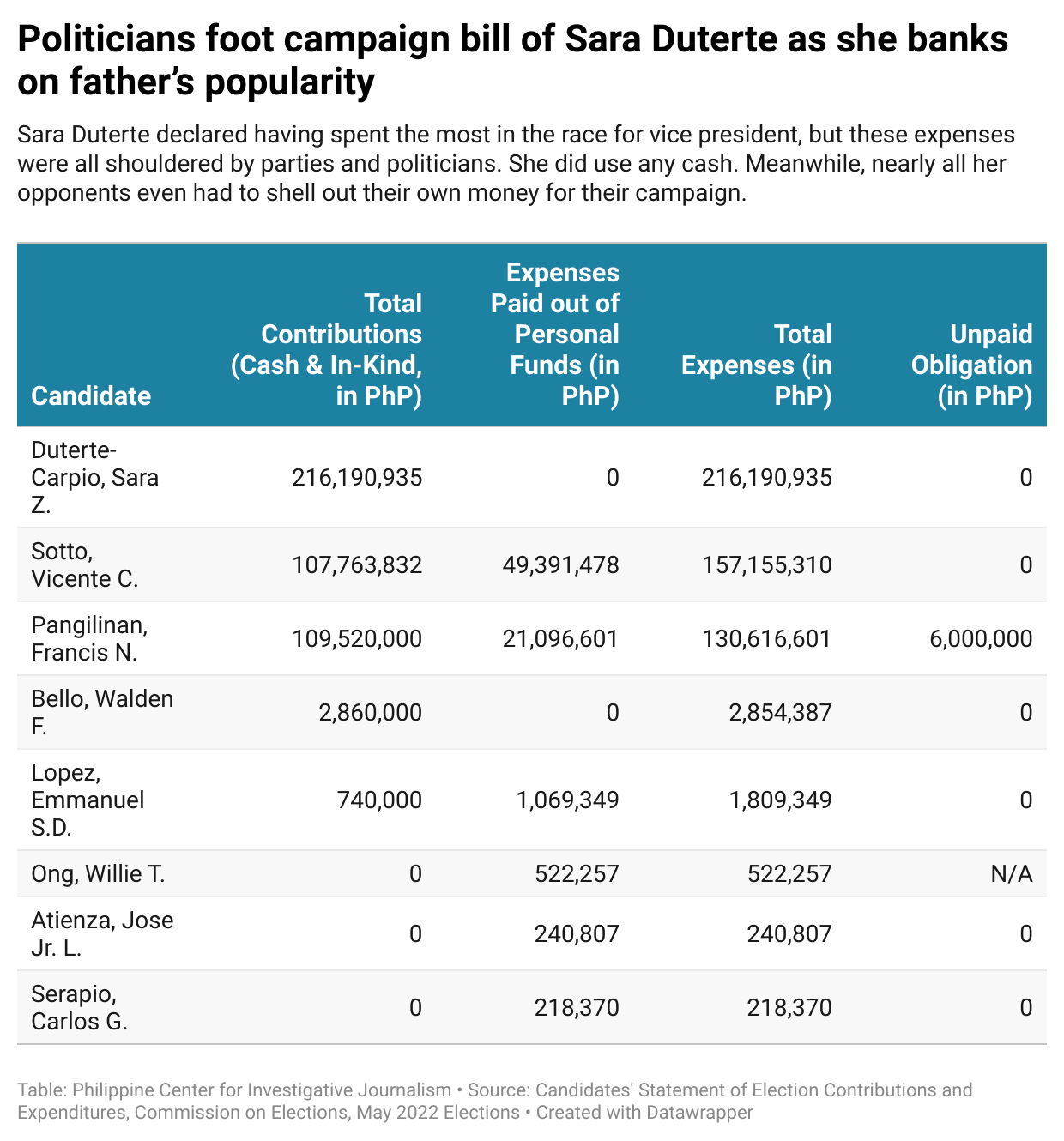 Taking into account all of Duterte’s in-kind contributions, only P3 per voter was spent for her to become vice president. Yet she won even more votes than Marcos. (Explore the data: A tale of two SOCEs)

Duterte’s showing in the May 2022 national polls was consistent with how the Dutertes of Davao City won local elections: They spent little and relied on name recall. In 2016, the Philippine Center for Investigative Journalism (PCIJ) reported that Sara and brother Paolo did not spend more than 5% of their spending limit.

The patriarch himself, Rodrigo Duterte, was not the top spender when he ran for president in 2016. Sen. Grace Poe outspent him but she ended up in third place.

Experts said it shows how personality politics, apart from money, continues to dictate results of Philippine elections. A candidate is either moneyed or popular to win the polls.

Like the Marcoses, Atienza said the Dutertes made “investments” before the campaign. The circumstances were not exactly the same for both families, however. The Dutertes, in particular, benefited from social media exposure through the vloggers or influencers who promoted them.

“Even before the campaign for 2022 [elections], they already [had] very good social media exposure [and] for Sara Duterte as well,” Atienza said.

“Malakas talaga ang mga Duterte,” said Caritos. “For you to not ‘exert’ effort and spend cash, and for just the individuals to donate to your cause, to your campaign, that speaks well of the ‘brand.’ Parang gagastusan ka pa para makasama ka,” she said.

Sara Duterte received donations from three political parties, a good indication of the depth and breadth of her alliances across party lines.

As early as November 2021, the Arroyo-led party had endorsed Marcos and Duterte as its candidates for the May 2022 elections.

Lakas-CMD shouldered P139.12 million of Duterte’s expenses. This amount was used by the party to pay for advertisements, travel expenses, campaign materials, meals, and lights and sound equipment.

Lakas-CMD, in its SOCE, declared receiving a total of P180.19 million in contributions.

The party of former President Joseph Ejercito Estrada, another key ally, donated to her campaign. Pwersa ng Masang Pilipino (PMP) gave P7.55 million worth of advertisements, according to her SOCE.

Another party, Duterte Youth, gave P361,401 worth of ads to Duterte.

Duterte Youth or “Duty to Energize the Republic through the Enlightenment of the Youth,”  is a party-list organization formed in 2016 to support the Duterte administration’s programs.

PCIJ’s analysis of Nielsen data and verification with the candidates showed that these political advertisements were not for Duterte’s benefit alone.

Gatchalian and Roque paid for ads where they appeared with Duterte, who dominated the surveys for vice president. Nielsen is a research agency that monitors ad placements on TV, radio, print and outdoor.

During the last week of the campaign period or from May 2 to 7, 2022, Gatchalian paid for 31 “Sara Duterte” advertiemtns that also included “Win Gatchalian (For Senator)” as a “brand and product,” Nielsen data showed.

Political advertisements posted on YouTube, including Gatchalian’s channel, also showed Gatchalian and Duterte together. In one advertisement, the end tag showed that the ad was “paid for” Duterte and “paid by” Gatchalian.

Roque told PCIJ that his in-kind contribution reflected in Duterte’s SOCE were indeed for the advertisements where Duterte endorsed him. “Comelec treats it as a donation in kind. I did not pay ads for her exclusively,” the former presidential spokesperson said.

As to why Duterte appeared in his ads, Roque said “[s]he was most endeared to voters as i[n] fact I was correct: She got the highest votes ever.”

Roque reported receiving P156.23 million in contributions and spending P166.02 million, according to his SOCE. He also spent P9.78 million of his own money on campaign expenses.

PCIJ also reached out to Gatchalian for comments on why he donated to Duterte and why he chose to have her in his ads. The senator has not responded to PCIJ’s queries as of the posting of this story.

Gatchalian was initially included in the senatorial slate of Panfilo Lacson and Vicente “Tito” Sotto III, but he was dropped after endorsing Marcos and Duterte when the official campaign period began in February 2022.

The senator declared getting P138.67 million donations, a significant amount of which came from relatives, according to his SOCE.

Atienza said Duterte benefited from the popularity of her father, Rodrigo Duterte, who kept high approval ratings until he stepped down as president. Her inherited popularity helped other candidates, too, including runningmate Marcos, who had difficulty selling himself in areas like Mindanao because of the legacy of his dictator-father and also because some politicians were not sold on him.

“But with Sara Duterte as a ka-tandem, it was really helpful. I guess for senatorial candidates like Harry Roque and Sherwin Gatchalian, they will benefit if they appear in ads with Sara Duterte. Beneficial sa kanila rather than [it is beneficial] for Sara,” she said.

Before the 2022 elections, the Corporation Code prevented companies like Esdevco from making political contributions. The prohibition was lifted after the passage of Republic Act 11232 or the Revised Corporation Code, which took effect on Feb. 23, 2019.

Section 35 of the revised code now states that every corporation has the power and capacity “to make reasonable donations… provided that no foreign corporation shall give donations in aid of any political party or candidate or for purposes of partisan political activity.”

The new code now limits the prohibition on corporate donations to foreign entities.

However, not all domestic corporations can donate. Section 95 of the Omnibus Election Code prohibits candidates from receiving donations from “natural and juridical persons who hold contracts or subcontracts to supply the government or any of its divisions, subdivisions or instrumentalities, with goods or services or to perform construction or other works.”

PCIJ did not find Esdevco in the Philippine Government Electronic Procurement System (Philgeps) database of bid and award notices. However, another company related to Escandor, Genesis 88 Construction Inc., is listed as having government contracts.

Genesis 88 won over P657.94 million worth of projects from the Department of Public Works and Highways in Davao City between January and March 2022. Some of these projects have end dates until December 2022, Philgeps data showed.

The prohibition exists to help prevent conflict of interest, said Caritos of Lente. Over the years PCIJ has reported on how prohibited donors have found a way to give money through other parties or individuals.

Caritos, an election lawyer, said this loophole had been taken advantage of by donors. It’s time for the Comelec to assert its authority and power over such activities, she said. –PCIJ, September 2022

With research by Elyssa Lopez and Erika Pearl Aguilar