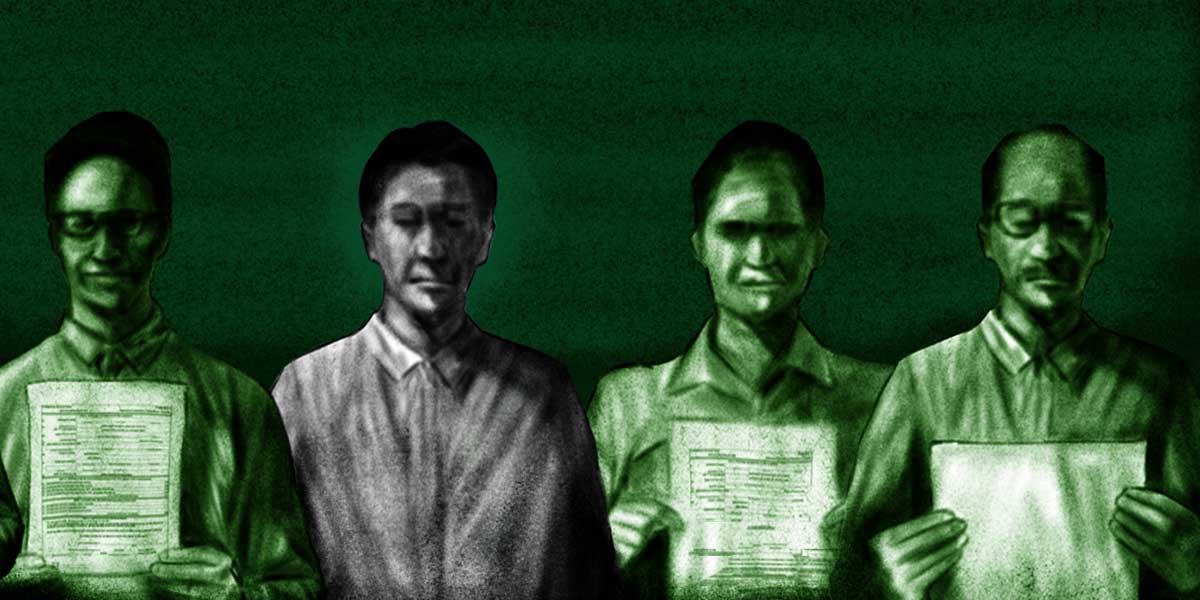 Of the 86 candidates who ran for national posts in the May 2022 polls, a quarter or 21 failed to submit their Statement of Contributions and Expenditures (SOCE) to the Commission on Elections (Comelec).

Section 14 of Republic Act (RA) 7166 or the Synchronized Elections Law requires every candidate as well as the treasurer of a political party to file their “full, true and itemized statement of all contributions and expenditures in connection with the election” within 30 days of the polls.

The 21 candidates included three aspirants for president, one for vice president, and 16 for senator. The list is a mix of government officials and ex-lawmakers, like former Palace spokesperson and foreign affairs undersecretary Ernesto Abella, former Bayan Muna representative Neri Colmenares, and former judge Silvestre Bello Jr.

The Philippine Center for Investigative Journalism (PCIJ)’s review of campaign-finance records showed that the SOCEs of these candidates were missing from the files of the Comelec’s Campaign Finance Office (CFO).

On June 9, 2022, the Comelec Education and Information Department (EID) issued a press release identifying the national candidates who submitted the SOCE by the June 8, 2022 deadline. The 21 candidates identified by PCIJ whose records are missing are not on the Comelec EID list.

The SOCEs of candidates for president, vice president and senator are supposed to be filed before the Comelec CFO. Candidates for local positions need to file at the local offices of the poll body.

(PCIJ has obtained access to the SOCEs filed by national candidates. It does not have information on who failed to file SOCEs at the local level.)

Colmenares told PCIJ that he did file his SOCE. We have yet to get details about his supposed filing. His records however are not with the Comelec CFO. He is not also included in the Comelec EID press release.

Carmen Zubiaga, who ran for Senate, said she was aware of the SOCE requirement but did not submit because she claimed did not receive any donation.

Section 14 of RA 7166 states that no elected candidate shall enter upon the duties of office until he or she has filed his or her SOCE. While none of these 21 candidates won the recent polls, they would still be held liable for failing to submit the document.

According to the same law, failure to file the SOCE constitutes an administrative offense, which requires violators to pay an administrative fine ranging from P1,000 to P30,000, at the discretion of the Comelec.

For candidates for president, vice president, and senator, non-filers need to pay a fine of P30,000 for a first offense and P60,000 for a second offense.

After the second offense, a candidate becomes subject to perpetual disqualification from running for or holding a public position. This means that failing to file the SOCE may also haunt candidates in the event that they are appointed to a government position.

“The idea of perpetual disqualification to hold public office is for appointed or elected [candidates],” Bag-id said. “Some may think that this disqualification applies to those who were elected only. If they fail to file their SOCE [more than one] time and then they get appointed to a permanent [government] position, the same rule applies.”

“It’s a public concern,” said Eric Jude Alvia, secretary general of National Citizens’ Movement for Free Elections or Namfrel, noting that the SOCE could be used as “a tool of voters post-Election Day to track performance in government.”

Angel Averia Jr., the Namfrel chairperson, said people could check whether candidates dispensed any favors to their donors if the latter’s identities were known.

The SOCE is composed of five forms:

Comelec has released on its website the Form 1 of national candidates’ SOCEs as well as those of party-list groups and political parties.

In August 2022, PCIJ reported that Ferdinand “Bongbong” Marcos Jr.’s return to Malacañang was funded by donors linked to his father’s cronies as well as government contractors. While his party, the Partido Federal ng Pilipinas, footed 40% of his campaign bill, the remaining cost was covered by tycoons in the real estate, retail, construction, and shipping industries.

Vice President Sara Duterte on the other hand did not shell out a single peso or receive any cash donation. She only reported receiving in-kind donations from three political parties, two senatorial candidates, and a Davao-based realty firm, her SOCE showed.

Arwin Serrano, a member of the board of trustees of the Parish Pastoral Council for Responsible Voting (PPCRV), said people who ran for office knew that filing a SOCE was required and in fact swore to do it.

When a candidate files his or her certificate of candidacy, he or she swears under oath to “file, with the Commission, within 30 days after Election Day, a full, true and itemized Statement of Contributions and Expenditures (SOCE) in connection with the election,” among others.

“Kaya kapag ‘di nila ito ginawa, maski sila ay natalo, paano natin sila pagkakatiwalaan the next time around (If they are not able to fulfill this, even though they lost, how can we trust them next time around)?” Serrano said.

Failure to file SOCEs is a common election offense. In 2016, PCIJ reported that 95 SOCE non-filers ran in the May 2016 elections despite their perpetual disqualification from office. In the same election year, 3,937 candidates failed to file the document.

Senatorial candidate Carmen Zubiaga said she was aware that she needed to file the SOCE but did not submit the document because she did not receive any donation.

“Wala naman akong tinatago. Alam naman natin na kailangan natin mag-file… Ano ang ilalagay ko sa SOCE? Wala naman akong natanggap. Dapat meron kayong form na wala kayong ide-declare... Wala silang form. Anong ifi-file ko? Baka mamaya, zero, e bakit pa ako nag-file (I am not hiding anything. We do know that we have to file. But what do I put in it? I didn’t get anything. They should have a form for those who have nothing to declare. They do not have any form for it. What would I file? If it’s zero, why did I even bother filing)?” she said.

Averia of Namfrel said a candidate still needed to submit the SOCE whether or not expenses were incurred, or donations were received.

Section 14 of RA 7166 states that every candidate must file their SOCE, as it is an obligation that applies to all, regardless if they received campaign donations or not.

As of September 2022, the Comelec CFO has filed petitions for the perpetual disqualification of 258 candidates for their failure to submit their SOCEs in previous elections..

Moreover, CFO records showed that a total of 1,363 campaign-finance related cases were pending: 1,202 cases of overspending; 130 petitions for perpetual disqualification; and 31 petitions for administrative exclusion in relation to the non-filing of SOCEs. (See related story: Isko Moreno’s overspending case still in limbo after five years)

Alvia urged the Comelec to step up in prosecuting these kinds of cases.

“[Candidates] see [the lax] implementation, the inconsistent implication of the law, [that] they can be absolved of the non-filing of the SOCE,” he said.

That the Comelec loses in some election cases also sends a signal to candidates who are not mindful of their campaign-finance obligations, Alvia said.

Averia said “there should be consistency in enforcing [the rules].” –PCIJ, September 2022