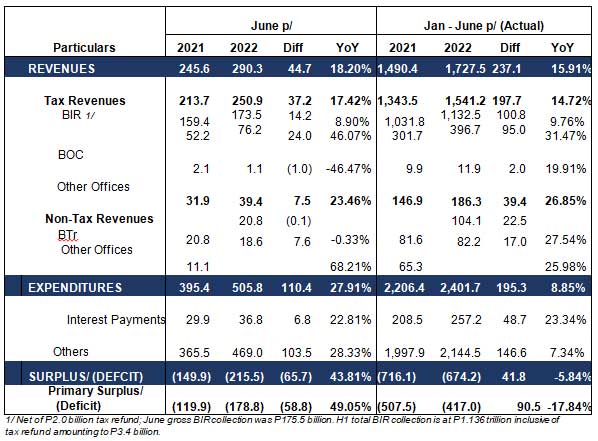 The June outturn was driven by the 27.91% growth in expenditures which outpaced the 18.20% increase in government receipts.

Broken down, tax revenues made up 89% or P1,541.2 billion of the total whereas non-tax collections contributed the remaining 11% or P186.3 billion.

The agency attributed the gains from anti-smuggling measures including the fuel marking program which was further boosted by elevated oil prices and peso depreciation.

Income collected and generated by the Bureau of the Treasury (BTr) for the month was at par with last year’s P20.8 billion.

January to June revenue performance was already 70.18% or P42.9 billion above the original full-year target of P61.2 billion on account of higher dividend remittance and interest income from NG deposits.

Revenue collections from other offices (other non-tax including privatization proceeds and fees and charges) for June reached P18.6 billion, significantly up by 68.21% or P7.6 billion YoY. Total collection of P82.2 billion as of end-June 2022 likewise represented a 25.98% or P17.0 billion increment over the 2021 comparable figure and was 43.68% (P25.0 billion) better than the six-month program of P57.2 billion.

June NG expenditures reached P505.8 billion, 27.91% or P110.4 billion more than the P395.4 billion last year mainly on account of higher capital outlay disbursements for road and transport infrastructure programs of the Department of Public Works and Highways (DPWH) and Department of Transportation (DOTr), respectively, and projects under the Revised Armed Forces of the Philippines Modernization Program (RAFPMP) of the Department of National Defense (DND). Spending, likewise, grew on the back of the implementation of various social protection programs of the Department of Social Welfare and Development (DSWD), the release of the P10.0 billion Coco Levy Fund, and higher personnel services expenditures.

This pushed the firstsemester spending performance to P2,401.7 billion, up by 8.85% or P195.3 billion YoY, but 3.04% or P75.4 billion lower than the P2,477.1 billion target set for the period, which can be largely attributed to the slower-than-expected capital expenditures amid the election ban in late March up to early May, as well as the timing of release for the special shares of LGUs in the proceeds of national taxes to July.

Interest payments (IP) for June amounted to P36.8 billion, increasing by P6.8 billion or 22.81% YoY partly due to the effect of monetary policy adjustments on the reissuance of government securities. Consequently, YTD IP from January to June rose to P257.2 billion, 23.34% or P48.7 billion more than what was registered in the same period a year ago. As a percentage of expenditure and revenue, interest payments for Jan-Jun 2022 accounted for 10.71% and 14.89% respectively, compared with 9.45% and 13.99% last year.

Signs that there is a Black Sheep in the Family