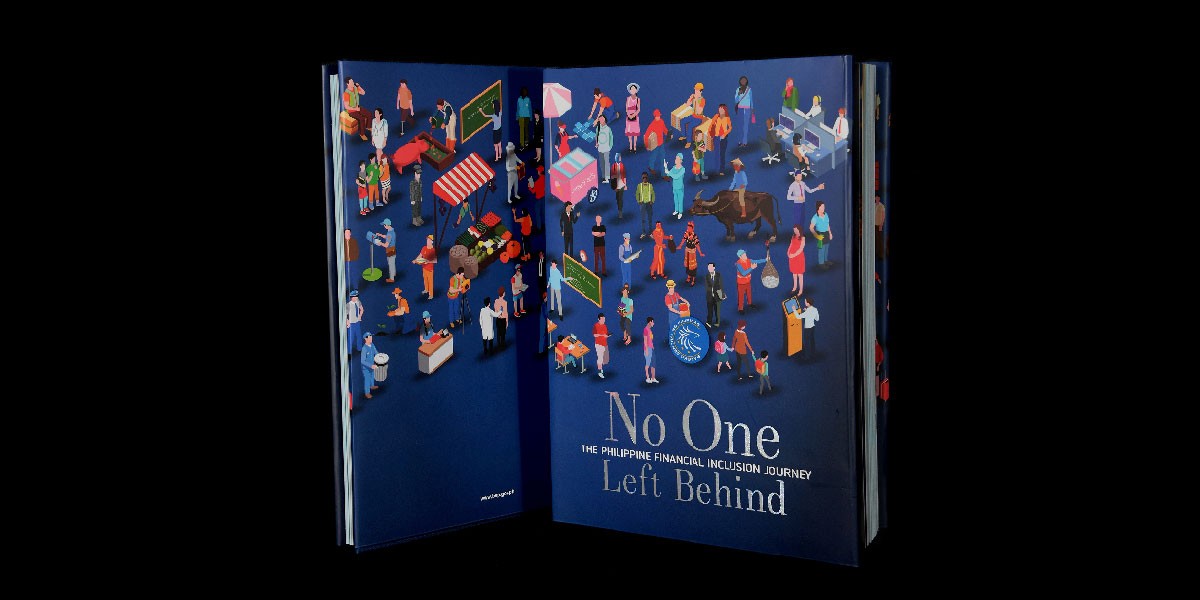 The Bangko Sentral ng Pilipinas (BSP) recently published “No One Left Behind,” a book chronicling the beginnings and evolution of its financial inclusion journey.

It is the fourth in a book series celebrating 70 years of central banking in the Philippines.

With stories and testimonies told firsthand by advocates, champions, and partners, No One Left Behind offers a glimpse of the BSP as a responsive, reform-oriented, people-centric institution through its financial inclusion work, which started in the 2000s under the governorship of the late Rafael B. Buenaventura with the adoption of microfinance as a flagship advocacy for poverty alleviation.

The late Governor Buenaventura had said that the BSP, as a major financial regulator in a developing economy, had always “felt a responsibility to try to do something more direct and immediate than our traditional tools allow us, in order to alleviate the poverty surrounding us.”

in his foreword, Governor Benjamin E. Diokno highlighted the accomplishments and enduring efforts of the BSP through the years.

“Each chapter chronicles a step in our journey so far – the adoption of microfinance as an advocacy for poverty alleviation, the embrace of innovation for effective policy formulation and implementation, the ensuing impact of our initiatives, the eventual maturity into a thought leader, and finally, what the future holds for the BSP and its financial inclusion work.”

In the book, former Governor Amando M. Tetangco, Jr. recounts the rewarding experience of steering financial inclusion as a top priority in the BSP agenda and the difference it has made on the lives of ordinary Filipinos.

“[Financial inclusion] has had a tangible impact on the Filipino people, enabling the BSP to bring its operations closer to the people and build a positive image of the central bank that cares for the welfare of the marginalized segments of society.”

The book also pays tribute to the late former Governor Nestor A. Espenilla, Jr., whose pioneering work has been recognized at home and abroad.

On the BSP’s groundbreaking pursuit of financial inclusion, Governor Espenilla had said, “Our dreams have to be audacious and ambitious enough to compel us to overcome inertia, rethink our approaches, and aggressively seek opportunities.  Are we bold enough to imagine new and greater possibilities for the poor we serve? …The whole point, essentially, is that no one is left behind.”

The book conveys the BSP’s steady commitment to uplift the lives of Filipinos by building on accomplishments through the years.

“It is our hope that this book inspires and lead to greater appreciation for and renewed pursuit of financial inclusion in the country.  It serves as a commemoration of what we have achieved so far, as well as a reminder of our aspirations and the long road ahead,” Governor Diokno said.

To reach a wider audience, No One Left Behind will be made available to the public in both printed and electronic formats.  An e-copy of the book can be downloaded via the following link: https://www.bsp.gov.ph/Media_And_Research/Publications/BSP_No_One_Left_Behind.pdf.