BACOLOD City – Various groups, led by San Carlos Bishop Gerardo Alminaza, submitted a statement of opposition to the Sangguniang Panlalawigan (SP) of Negros Occidental with the demand to urgently revoke the Resolution of Non-Objection (RONO) enacted by the SP with regard to the planned construction of a 300 MW Liquified Natural Gas (LNG) Combined Cycle Power Plant in San Carlos City.

“We maintain that the resolution of non-objection from the Provincial Board is premature, invalid, and is not representative of the multiple stakeholders from San Carlos who openly objected against the LNG project during the public scoping,” Bishop Alminaza on the proposed plant by the San Miguel Corporation-owned Reliance Energy Development Inc.(REDI-SMC). 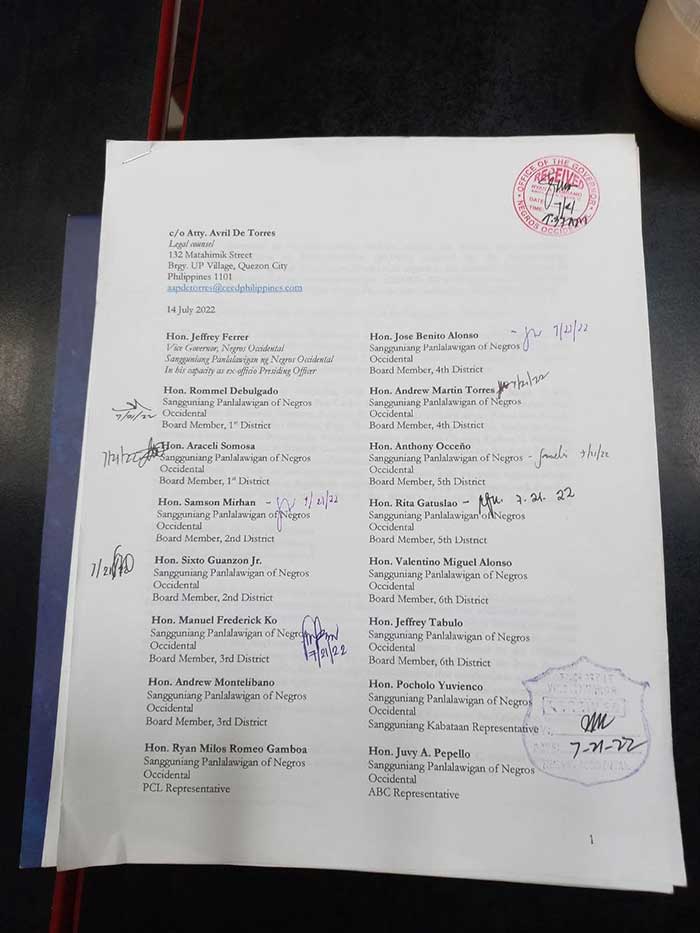 Bishop Alminaza explains that the Environmental Impact Assessment (EIA) of the project is “still under preparation” by the proponent, and that DILG MC 22-018 states that LGUs cannot issue a Letter of No Objection without an EIA, therefore deeming the non-objection invalid.

“We appeal to board members of the SP to adhere to their duty in protecting the interests of our people and the health of our environment,” said Bishop Alminaza. “This is being echoed by our fisherfolk communities in San Carlos who stood up against the project during the public scoping.”

Environmental groups urge leaders, both from the city and the province, to stand in solidarity with the residents of San Carlos and all stakeholders in protecting Tañon Strait, promoting healthy and sustainable fishing communities, and maintaining San Carlos fossil-free.

“Negros Occidental is known for being the Renewable Energy Hub of the Philippines, and the continued lack of RE development is becoming questionable. It’s ironic that the vast RE potential of the province remains untapped, while Negrosanons continue to suffer with high electricity prices,” said Griderick Alila from Konsyumer-Negros.

Youth-led environmental groups, in a statement released last April, also warned that the project would generate increased shipping traffic that will affect the Tañon Strait Protected Seascape, which has been declared as an Important Marine Mammal Area, and will destroy marine habitats, mangroves, and wetlands along the shoreline, generate pollution, expose local communities to various hazards, and would impact the livelihood of coastal communities in the long-term.

“REDI’s LNG plant is a great threat to the communities dependent on the Tañon Strait Protected Seascape. Noise pollution from shipping activities heavily affects the capacity of dolphins and whales to detect prey, since they use echolocation to navigate the waters. Disrupting already fragile ecosystems is nothing but a death blow to our climate-impacted communities and the livelihood of our fisherfolk,” said Bianca Montilla, co-convenor of Youth for Climate Hope.

“It is high time our leaders invest in supporting the development of RE infrastructures that have the potential to lower electricity prices, instead of building new power plants dependent on imported fuel, which is highly vulnerable to price shocks from the international market,” added Center for Energy, Ecology, and Development Deputy Executive Director Av De Torres.

Like coal, natural gas and its liquid form LNG is a fossil fuel that creates pollution and greenhouse gasses, which trigger worse climate change. Falsely touted as a clean alternative to coal, natural gas has also seen much pushback globally as it is primarily composed of a greenhouse gas than can trap heat in the atmosphere 80 times more effectively than CO2 over a twenty-year period, contributing to rising global temperatures.

“San Miguel Corporation pulled out its coal plans in San Carlos but simply replaced it with another fossil fuel that is no less dangerous. We already know that while it is true gas would produce less carbon dioxide than coal, it will instead release large amounts of methane in the atmosphere which can trap heat at a much greater capacity for a period of time. It makes not sense for Negros Occidental to turn to fossil gas when we have overflowing renewables that are more than enough to meet our power needs,” added Bishop Alminaza.