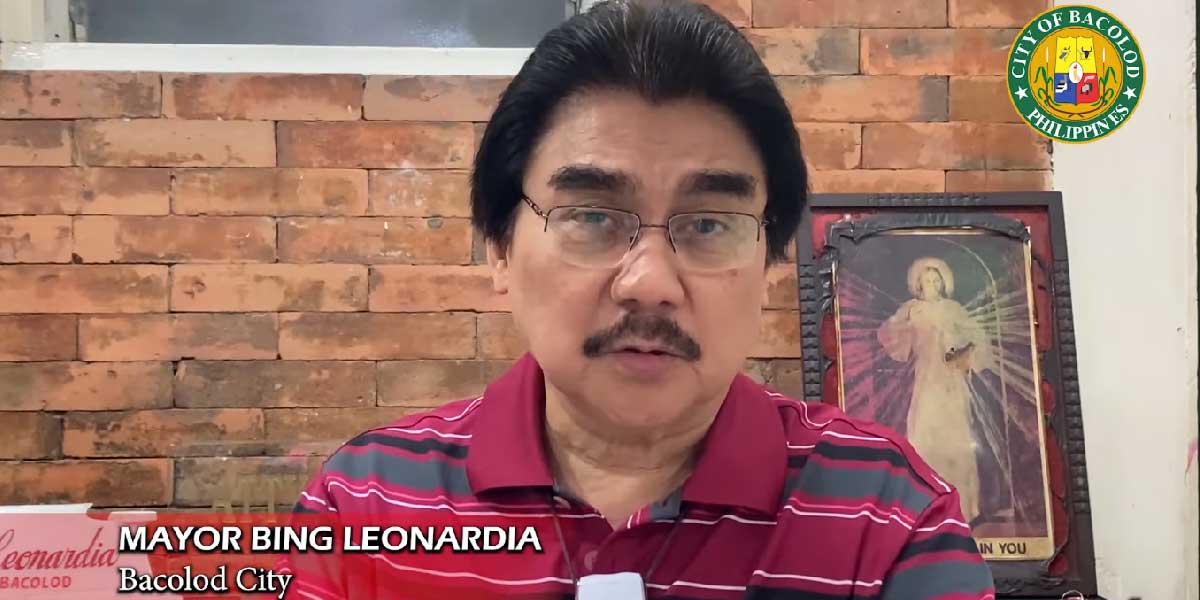 BACOLOD City – Mayor Evelio Leonardia said the barangays remain to be the “main battleground” as the city courses its way through the sudden spike of COVID-19 cases over the last two weeks.

“You know the situation today, and I am sure you will act correspondingly. We will continue to ask for your support and cooperation,” Leonardia told barangay officials in a virtual meeting Wednesday.

Joining them were Ma. Maredith Joy Madayag, director of the Department of the Interior and Local Government (DILG)- Bacolod; Col. Manuel Placido, director of the Bacolod City Police Office (BCPO), and the 61 barangay captains.

With Bacolod once again seeing an alarming increase in the number of COVID-19 cases, Leonardia said barangay officials must do again their part in the fight against the virus.

“This is really a barangay operation matter. We are not going to say that we are back to square one because there’s no doubt about it—we have already put in place many systems and infrastructures we did not have at the start of this pandemic. Rather, what is apparent now is that we are back in the danger zone,” the mayor said.

Leonardia said highly urbanized cities like Bacolod are “vulnerable” in terms of the viral spread due to their population density.

“Let’s all think about what Secretary Carlito Galvez said to me, that with the increase of cases in Manila, there is always a tendency that this will spill over to the highly urbanized cities,” he further said.

In the open forum, barangay officials and personnel of BCPO and members of TFD agreed to coordinate with each other.

“The police, Task Force Disiplina, and tanods will have to organize a composite monitoring team per barangay to be clustered under each BAC-Up Station. In the meantime, even at least one TFD member per barangay should already accompany the tanods when they go around to monitor the proper wearing of face masks and shields,” Pallen said.

For his part, Placido said: “The single objective is to stop the spread of COVID-19. The fight is in the barangay level. For me, I always tell the police to always persuade and encourage the citizens to comply with the protocols and avoid, as much as possible, using force.”

“Unlike other places, we can still manage the crisis. If we recovered from the high cases last year, we can still do it again. The real work here is with the barangay officials since they are the ones who are always visible and near to the people.”

Madayag, meanwhile, reminded the barangay officials to help in the implementation of the “BIDA ang may Disiplina” program.

“We have to strengthen the task forces at the barangay. This will help in the implementation of our program for the observation of minimum health protocols,” Madayag said.

Taking notice of some establishments in the barangays serving liquor beyond allowed hours, Familiaran said: “We will be one to suffer for this if we don’t cooperate. Worse is, we will be the ones to take the blame for this. We have to cooperate with each other.”

Familiaran, quoting retired Maj. General Mel Feliciano who helped set up the Bacolod Emergency Operations Center (EOC), added that the fight against COVID-19 is “at the barangay level since you are the frontliners.”

Responding to a concern raised by one punong barangay pertaining to the conduct of religious gatherings in small, enclosed spaces, Novero said that this can be settled by talking directly to the religious leaders.

“They are very respectful people, our pastors. Just tell them frankly and gently and they will understand,” Novero said.

Echoing the call for barangay pro-activeness, Novero also said: “If our guard in the barangay level is not enough, COVID will spread in our community. We have to be strict in the implementation of our health protocols in the barangays.”