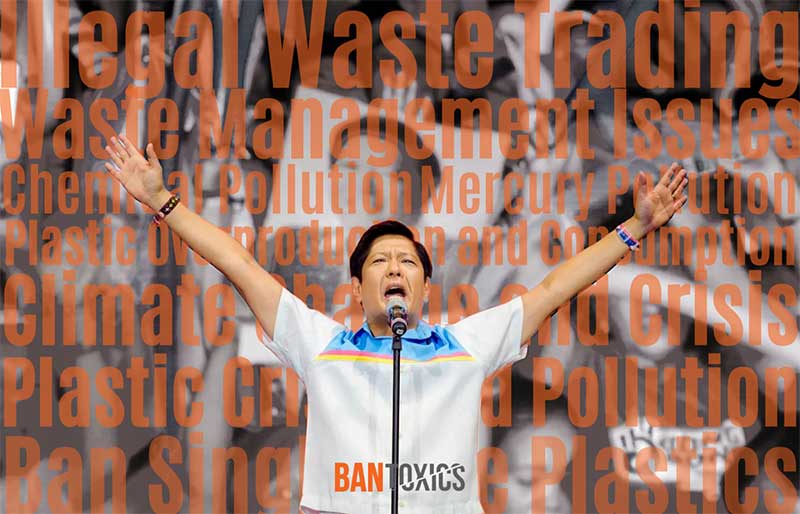 Toxic and waste watchdog group BAN Toxics urges President Ferdinand Marcos Jr. to address the country’s crisis on plastic, toxic, and waste, and ban single-use plastics in time for his upcoming State of the Nation Address on July 25.

“While we welcome President Marcos’ declaration to solve the Philippines’ problem with plastic pollution and climate change in his inauguration speech last June 30, he should take a stronger move towards addressing our issues with plastic, toxic, wastes and climate change. The government can start by implementing measures for the total ban of single-use plastics to reduce waste production and pollution,” says Reynaldo San Juan, executive director of BAN Toxics.
“BAN Toxics supports the excise tax on single-use plastic bags as an effort to address the country’s plastic overconsumption and crisis; however, we are also wary that the burden will fall on the shoulders of taxpayers, consumers, and small businesses. Moreover, the tax also does not explicitly solve the plastic, toxics, and waste pollution in the Philippines,” he added.
House Bill 9171, also known as Plastic Bags Tax Act, aims to impose a 20 PHP excise tax for every kilogram of single-use plastic bags removed from the place of production or released from the custody of the Bureau of Customs.[1]

The Department of Finance’s (DOF) Policy, Research, and Liaison Office Director, Arvin Lawrence N. Quiñones, disclosed that the country could collect around 923 million PHP for 2023 should the government decide to impose the tax on plastic bags.

An alarming figure of 400 million tons of plastic wastes produced annually prompted the recent United Nations Environment Assembly (UNEA) to create a new plastics treaty to address the world’s problem with plastic overproduction and overconsumption. The resumption of the fifth UNEA session (UNEA 5.2) in Nairobi, Kenya, aimed to address the global plastic crisis through the development of a new international legally binding treaty with a 2024 deadline.[3]

Plastic Crisis in the Philippines

Plastic pollution is one of the Philippines’ greatest waste problems. In 2015, the country produced 2.7 million tons of plastic waste per year, making it the world’s third largest producer of plastic waste.[4] According to a 2018 waste management practices study, despite the Philippines’ high garbage collection rates, the country still has issues with proper waste disposal.[5]

A number of regulatory measures have been implemented at both the national and local levels to address the plastic crisis in the Philippines.

Although some LGUs have passed ordinances prohibiting or regulating the use of plastic bags in their jurisdiction, the effectiveness is dependent on implementation and monitoring. Furthermore, R.A. No. 9003 classified plastics as “recyclable materials” despite the majority of plastic being non-recyclable. Only about 9% of plastic waste has been recycled thus far; the rest is either burned, landfilled, or released into the environment.[7]

Waste Trading in the Philippines and Basel Ban Amendment

In January 2014, a shipment of Canadian waste was discovered at the Manila International Container Port, making it the most notable instance of foreign waste dumping in the Philippines. Since then, environmental groups have advocated for the repatriation of waste shipments.

BAN Toxics also reiterates the call for President Marcos Jr. to protect the Philippines from turning into a dump site for first world countries by ratifying the long overdue Basel Ban Amendment. The Basel Ban Amendment is an international treaty that prohibits the export of hazardous wastes from member states of the European Union, the Organization for Economic Cooperation and Development (OECD), and Liechtenstein to poorer countries, whether for recycling or not.

Half of world’s birds in decline, species moving ‘ever faster’ to extinction – report