Garbage is definitely the smelliest challenge facing the planet.

There’s so much plastic lying around that scientists are proposing this era to officially be termed the Anthropocene, an epoch completely dominated by humans marked on the fossil record not by fossilized bones, but plastic.

Though humanity’s ability to produce waste still outstrips its ability to manage it, Pinoy waste pickers and junkshops are helping turn the tide in their own way. Partnerships in Environmental Management for the Seas of East Asia (PEMSEA), a regional organization which pushes for integrated solutions to coastal and marine problems, including  marine plastic pollution, talks with three of them. 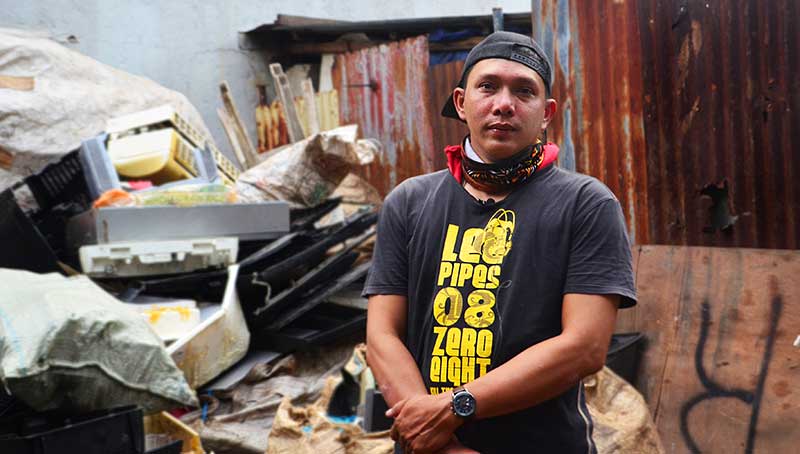 “I’m not ashamed to be called a mangangalakal,” says waste picker Sherwin Salazar. “I’m proud of it, because I was able to provide honorably for my family. If you put in the hours and effort, you can make a surprising amount of money. Yesterday I made PHP1200, even more than a call center agent.” (Gregg Yan / PEMSEA)

“The best time to hunt for scrap is right after homeowners leave their garbage out, but before government collection trucks arrive, usually between 10PM to 7AM. The sooner you can pick through garbage for good finds, the better,” shares Sherwin Salazar, a 38-year-old mangangalakal or waste picker.

We’re outside a bustling junkshop in Dasmariñas City in Cavite where he had just sold over a thousand Pesos worth of . . . junk.

Sherwin is a master of the trade, having been a waste picker for 25 years. His parents separated early, so he learned to fend for himself. While other kids dreamed of the latest toys or videogames, Sherwin ‘hunted for treasure’ in Cavite’s garbage dumps.

“I was still in school when I started pawing through old lots, dumps and riverbanks in a never-ending search for bakal, bote, plastik at dyaryo (scrap metal, bottles, plastic and newspapers). I used a big old sack that weighed so much,” he recalls. “Since I worked hard, I was taken in by a junkshop, where I earned around PHP100 daily. I was just 12 then.”

Eventually, Sherwin traded his sack for a wooden kariton or pushcart. “I was so happy to get rid of that heavy old sack,” he laughs. With his slow but huge kariton, he could cover a bigger area, collecting heavier and more valuable scrap.

One day, he noticed a mambobote or bottle picker using a pedicab to haul heaps of bottles, prompting him to ask his boss if they could invest in one. “I couldn’t be prouder when I got that shiny new pedicab,” he says. Instead of collecting from rivers and nearby dumps, he could finally visit villages to get the best items like broken washing machines, air conditioners and other appliances.

Today Sherwin still collects scrap, but with a motorized tricycle which brings him to nearby cities like Tagaytay.

“Most Pilipinos think pangangalakal is nothing more than a dirty job, but it’s far better than working in other jobs like construction. You become your own boss and control your time so if you put in the hours and effort, you can make a surprising amount of money. These days I make anything from PHP1000 to PHP1500 daily. Yesterday I made PHP1200, even more than a call center agent.”

The garbage of others – plus his own grit – allowed Sherwin to raise a family. “I’m not ashamed to be called a mangangalakal or basurero. I’m proud of it, because I was able to provide honorably for my family, while putting my children through school and bringing them to nice places. The life of a waste picker is definitely dirty, but if you meet life’s challenges head-on and ask for a little help from above, then it’s really rewarding.” 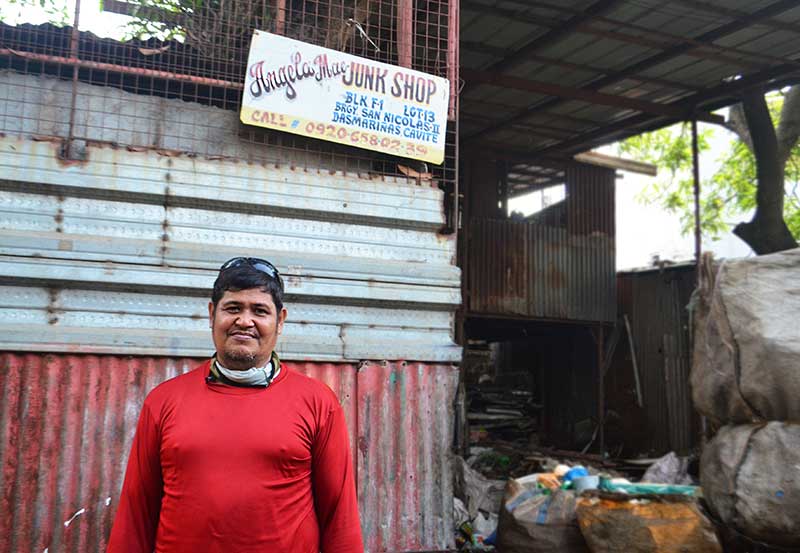 “The garbage of others provides a good life for many people like us,” explains junkshop owner Arles Gozar. “By employing people even part-time, my tiny junkshop helps provide for them and their families. In our own small way, we’re doing what we can to help keep our country clean.” (Gregg Yan / PEMSEA)

“Trash is cash,” explains Arles Gozar, who runs the Angela Mae Junkshop in Dasmariñas. “I employ anywhere from nine to 15 people part-time to help pick and pack garbage that waste pickers or mangangalakal bring here.”

Looking like Santa Claus without a beard, the burly Arles is clad in a tight-fitting red rash-guard and colorful board-shorts. Behind him is his crew, expertly hacking apart old electric fans, exhaust fans, air conditioners and other items for usable parts. Every few minutes, a new picker brings in choice pickings in exchange for cash.

Most valuable of all is tanso or copper, sold at PHP355 per kilogramme (KG), followed by sibak or hard plastic (PHP15/KG), bakal or scrap metal (PHP14/KG), yero or corrugated iron sheets (PHP11/KG), bote or plastic bottles (PHP10/KG), lata or tin cans (PHP8/KG) and karton or cardboard (PHP4/KG).

While we were chatting, a small kid of about 10 brought in a cardboard box full of scrap paper. He got PHP4, enough perhaps to buy himself a bit of candy.

“Many people in this area don’t have jobs. By employing people even part-time, my tiny junkshop helps provide for them and their families. The garbage of others provides a good life for our family – I can even help my relatives from the province when they’re down and out, because we have a little extra.”

Junkshops like Arles’ provide a vital solution in the world’s quest to minimize waste – by recycling, upcycling or otherwise making use of items which would otherwise be bound for landfills and dumpsites, trash is reduced. Less trash means less garbage flowing down rivers whenever a dumpsite floods.

Junkshops are part of the solution to pollution. “We’re of course business owners first, but in our own small way, we’re doing what we can to help keep our country clean,” notes Arles. 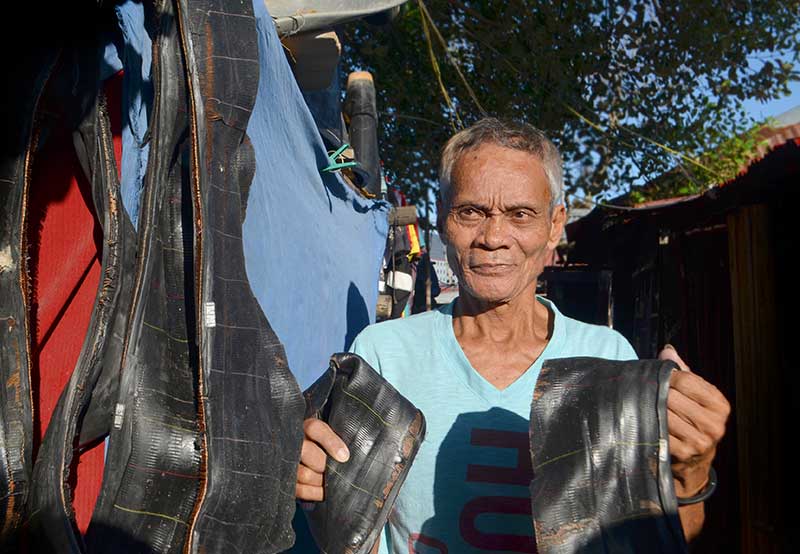 At 57 and too old to work in construction, recycler Miguel Sabaño whiles away the hours ripping out endless threads from discarded vehicle tires. Once cleaned, the tubes and tires sell for PHP20/KG, enough for about half a kilogramme of rice. “It’s not a lot, but having rice today spells the difference between life and death for some people.” (Gregg Yan / PEMSEA)

Like many people living in a shantytown called Tulay Kwatro at the northern tip of Kawit in Cavite, Miguel Sabaño, now 57, once relied on nearby brackish-water fishponds for food and livelihood.  This changed when some of Cavite’s fishponds were converted into offshore gambling centers. Miguel and many others found themselves unemployed.

“Now all we have are these scrap rubber tires,” he laments. Making use of their time when no better jobs like construction arise, Miguel and the residents of his community while away the hours ripping out endless rows of polyester or nylon threads which give motorcycle tires and inner tubes their pliable structure. They use an array of tools – rusty pliers, converted nail cutters, even their bare hands to tear and pluck off threads, which form tiny piles by their feet.

Once cleaned, the tubes and tires sell for PHP20/KG, enough for about half a kilogramme of rice. A long day’s work might yield two kilogrammes of processed rubber. “It’s not a lot, but having rice today spells the difference between life and death for some people,” he says quietly.

Being large and durable, rubber tires take anywhere from 50 to 100 years to decompose naturally. Instead of being dumped into landfills, they can be shredded and turned into chips, powder, cement or fuel. Used tires can also be turned into tables, chairs, garbage bins, plant pots, sandals and other useful products, providing further income for communities which can find creative uses for them.

While reducing waste, recycling provides livelihood opportunities for some of the world’s poorest communities.

“Supporting waste pickers and recycling facilities converts a significant portion of waste which would otherwise be dumped in landfills or in our rivers and seas, into useful products. These cottage industries also support the lives and livelihoods of thousands of Filipinos,” explains Thomas Bell, who manages PEMSEA’s Project ASEANO.

Project ASEANO aims to develop and promote sound and sustainable measures to reduce the impacts of plastic pollution and their implications on socioeconomic development and the environment. The project focuses on the city or municipal level, with Cavite’s Imus River as one of two project sites.

According to the Environmental Management Bureau (EMB), Cavite generated an average of 1514 tons of waste daily in 2018, 22% or 333 tons of which could still be recycled. The Imus River traverses the highest waste-generating cities in Cavite – Bacoor, Dasmariñas and Imus – making it a conveyor belt for plastics flowing out to Manila Bay.

Funded by the Norwegian Development Program to Combat Marine Litter and Microplastics, ASEANO is led by the Norwegian Institute for Water Research (NIVA) and the Center for Southeast Asian Studies (CSEAS) Indonesia in close collaboration with the PEMSEA Resource Facility and ASEAN Secretariat under the purview of the endorsing ASEAN sectoral body, the ASEAN Working Group on Coastal and Marine Environment (AWGCME).

The results of the project will be synthesized into an LGU training manual, toolkit and best practices handbook of policy, monitoring tools and technologies for plastics management that can be used as a reference by LGUs in Cavite, the rest of the Philippines, plus the entire ASEAN region.

“To decisively address plastic waste management, we need to include waste pickers and recyclers as major stakeholders,” concludes PEMSEA executive director Aimee Gonzales. “They are our frontliners in the war against waste.”