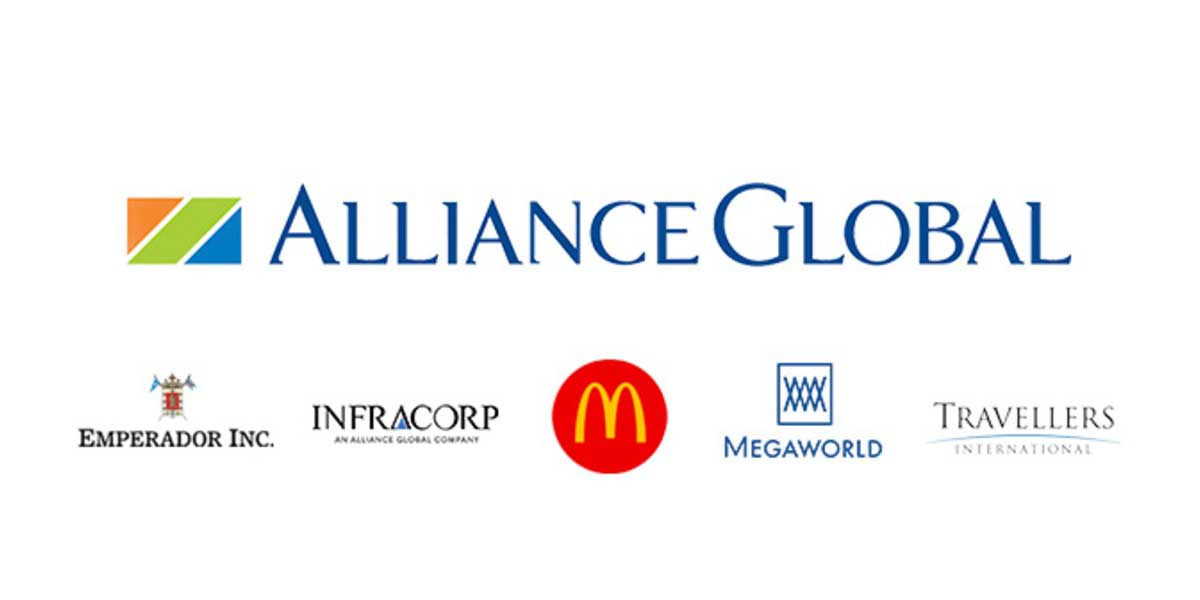 Alliance Global Group, Inc. (AGI), the holding company of tycoon Dr. Andrew L. Tan, has tripled its net income during the first half of 2021 to P12-8-billion from P4.1-billion during the same period last year, boosted by its diversified revenue streams that helped mitigate the impact of the strict lockdowns that were re-imposed in the National Capital Region and other parts of the country. Net income to owners also increased by 124% to P8.5-billion from P3.8-billion recorded the year before.

Consolidated revenues also rose by 16% to P71-billion during the first half of the year compared to last year’s P61.4-billion.

Quarter-on-quarter, net income to owners also rose by 132% to P6.0-billion from last year’s P2.6-billion Consolidated revenues, on the other hand, surged by 24% to P39.3-billion.

“All of our business segments here and abroad managed to sustain the quarterly growth trajectory we have been experiencing since the third quarter of 2020, indicating the extent of pent-up consumer spending across the globe, capped only by the prevailing restrictions in those areas to curb the rise of the COVID-19 Delta variant. We are ALSO relentless in our efforts to fully recover from this pandemic-induced business slump as soon as we can, through our superior brands and distribution system, more innovative products and services, strong relationships with our partners, cost-effective operations, and our efficient digitalization strategy throughout all our business segments,” says Kevin L. Tan, chief executive officer, AGI.

Premier township developer, Megaworld, sustained its quarterly improvement in revenues and earnings as all of its business units continued to adapt to the varying degrees of quarantine restrictions.  In the second quarter of 2021, attributable profit grew at a robust rate of 39% YoY and 12% QoQ, mirroring the sharp 38% YoY and 19% QoQ rise in consolidated revenues.  During the quarter, real estate sales recorded the strongest rebound of 62% YoY and 29% QoQ, amid sustained construction activity which boosted project completion.  Megaworld Premier Offices also posted 4% QoQ growth in office rental income, affirming its leadership in the office leasing segment and in catering to the more resilient BPO sector.  Megaworld Lifestyle Malls also recorded a 5% QoQ increase in mall revenues despite the limitations brought about by the quarantine restrictions, as it increased its alfresco dining options.  Revenues from Megaworld Hotels & Resorts also recovered 16% QoQ, as its in-city hotels continued to host quarantine guests.  In the first half, Megaworld’s revenues and earnings stood at P22.2-billion and P5.0-billion, respectively, reflecting a slight 7% dip from their levels the year before.

Emperador, the biggest global brandy company and owner of the world’s fifth largest Scotch whisky manufacturer, broke a new record in quarterly earnings when net income in the second quarter this year shot up 60% YoY to P3-billion, bringing its first half profit 53% higher YoY to P5.1-billion. Driving the strong growth was the improved performance of its whisky and premium brandy brands as various economies across the globe have started to open up.  Its whiskey sales through Whyte and Mackay continued to do well in North America, Europe and Asia, mainly in China.  Likewise, its Fundador Spanish Brandy de Jerez has maintained good traction in the UK, US and Canada, Mexico and in Spain. Emperador’s second quarter revenues rose 22% to P13.3-billion, boosting its first semester total by 18% to P25.3-billion.  EBITDA in the first half also grew 62% to P7.8-billion from P4.8-billion the year before.

Travellers International, the owner and operator of Resorts World Manila (RWM), felt the heavy weight of the re-imposed lockdown when it virtually had no gaming operations for the most part of the second quarter.  This brought its gross revenues lower by 12% QoQ to P4.6-billion during the period, although this still represents a five-fold improvement from its year ago level.  Gross gaming revenues stood at P3.4-billion, while its non-gaming revenues amounted to P1.2-billion for the same period.  During the quarter, Travellers recorded P4.8-billion in one-time gain from the services rendered by its subsidiary in relation to its Westside City project.  This allowed its net income to hit P3.74-billion during the quarter, bringing its first half profit to P2.6-billion, reflecting a turnaround from a net loss of P3.7-billion the year before.

Despite the prevailing quarantine restrictions, GADC continued to grow its sales revenues in the past four quarters, bringing the level to P6.1-billion in the second quarter this year.  This indicates an increase of 8% QoQ and 108% YoY.   In the first half, total revenues rose 21% YoY to P11.8-billion, as the country’s most dynamic quick service restaurant operator adapted to the New Reality through increased drive-thru activities and delivery services, while dine-in operations remained limited.  Various cost pressures, however, capped its net income to P49 million, still a marked turnaround from a net loss of P709 million the year before.  GADC ended the period with 653 stores nationwide.