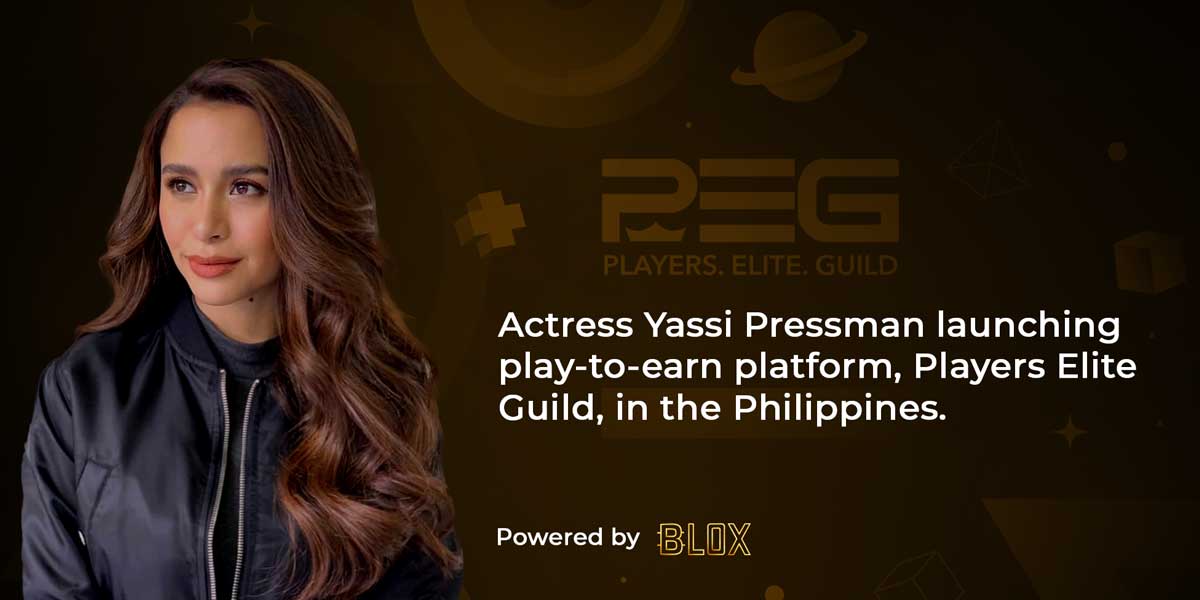 Actress, model, singer, dancer, and acclaimed host Yassi Pressman can now add another title to her list of accolades: tech founder. The twenty-seven-year-old Pressman is gearing up to launch a new play-to-earn platform in the Philippines.

Pressman was inspired to venture into the tech world with Players Elite Guild (PEG) in order to help Filipinos earn more in the web3 economy.

PEG invites its community members into an inclusive business culture that promotes self-improvement and unity, while focusing on sharing the educational tools that target the individual opportunities that exist for community members to use Web3.0 to develop financial freedom for themselves and their families.

Pressman explained that her new venture will help all types of gamers have the greatest experience possible. “For example, the platform’s features will help professionalize and stabilize the income of full-time players, while reducing the learning curve – and friction – of casual players who wish to dabble in different games,” said Pressman.

“Our platform will cater to gamers from all backgrounds. We want to show that P2E – like ecommerce – can be for every Filipino forward-thinking enough to give the space a try,” added Pressman, noting that they also want to build winning relationships with game developers, game operators, and other industry stakeholders.

Pressman and the rest of the team at PEG share in the deep belief of Global unity. PEG places the future of our youth at the “tip of the spear.”

The technology deployment on the P2E platform is being led by none other than Liezl Pecson, an information technologist, a blockchain architect certified by the Blockchain Council, and one of the foremost experts in Web3 development in the Philippines. Pecson has previously built a decentralized blockchain with national and international implementations, a decentralized internet, and even the first fiat mobile wallet built atop a blockchain.

Pecson’s aspirations for the functionality of the P2E platform are no less ambitious.

For the security of both parties, Pecson explained that the platform will be secured via BLOX, a decentralized blockchain that will help process and validate transactions via smart contracts executed via their own token. Such will ensure that both game developers and gamers can safely and confidently transact, enabling both to better focus on the heart of the gaming experience.

Pressman gravitated toward BLOX, as opposed to other global blockchains, because it has earned significant traction recently, including selection as a blockchain of choice from a variety of local business leaders, such as JCash CEO Emil Banno, who chose it for his ventures with Japanese investors; and the crypto marketplace Coexstar.

Pressman also appreciated that BLOX, like PEG, is inherently democratic. Filipinos can participate in the success of BLOX by mining BLX, its native token, on their Mac or PC. Doing so rewards miners with BLX, which will be publicly listed in August on Coexstar, which is licensed by both the Bangko Sentral ng Pilipinas (BSP) and Securities and Exchange Commission (SEC).

“It’s rare for Filipinos to get the opportunity to participate in the broader success of an ecosystem. That’s why I would encourage them to mine BLX from their desktop. By mining, they gain a foothold in the future of BLX, PEG, and indeed the very foundation of Web3.0 in the Philippines,” said Pressman, adding that mining can be a lucrative income stream for Filipinos who partake in the activity.

BLOX is a Decentralized Autonomous Organization or DAO) with the goal of democratizing cryptocurrency with its next generation DAOchain Technology. Its community-led organization shares common goals, from profitable investments to building impactful products with real-world applications — finance, governance, voting, education, fundraising, investment, art, global currency, and more. As an Algorithmically Managed Organization, stakeholders can participate in the growth, innovation, and evolution of its decentralized core.

Founded by Yassi Pressman, Players Elite Guild is a community that educates and introduces cryptocurrency to Filipinos in a more relatable way through play-to-earn gaming!