After having declared the most bike-friendly cities in the country for the 2021 nationwide leg of the Mobility Awards in November 2021, the event organizers visited the mayors of the Top 3 winners – Iloilo, Mandaue, and Naga, respectively – to personally congratulate them and hand over their recognition.

Iloilo City Mayor Jerry Treñas, Mandaue City Mayor Jonas Cortes, and Naga City Mayor Nelson Legacion all expressed their pride in this achievement and thanks for the recognition, during their respective awarding ceremonies held on separate occasions from March 25 to April 7, 2022.

“Here in Iloilo, we have noticed that more people are using bicycles as means of transportation because of the bike lanes. We are hopeful that this will promote healthier lifestyles while at the same time will further our efforts to combat climate change. Aside from the existing bike lanes, we are now helping DPWH develop additional bike lanes along the circumferential road, and this will even add more protected bike lanes in Iloilo city,” said Treñas on April 7.

“We know that cycling is not only good for our health in terms of exercise, but in the case of Mandaue where transport is the highest contributor to our greenhouse gas, the introduction of the bike network will help us reduce our greenhouse gas emissions. And, as the pandemic showed, it was the most convenient way of moving around when public transport is limited,” said Cortes on March 30.

“Here in Naga City, we have observed that the people who cycle are empowered especially during the pandemic. More people are encouraged to cycle ever since we started our share the road initiatives. We have noticed that there are fewer road incidents compared to the previous years,” said Legacion on March 25.

RELATED: Iloilo, Mandaue, and Naga hailed as the most bike-friendly cities in nationwide Mobility Awards. 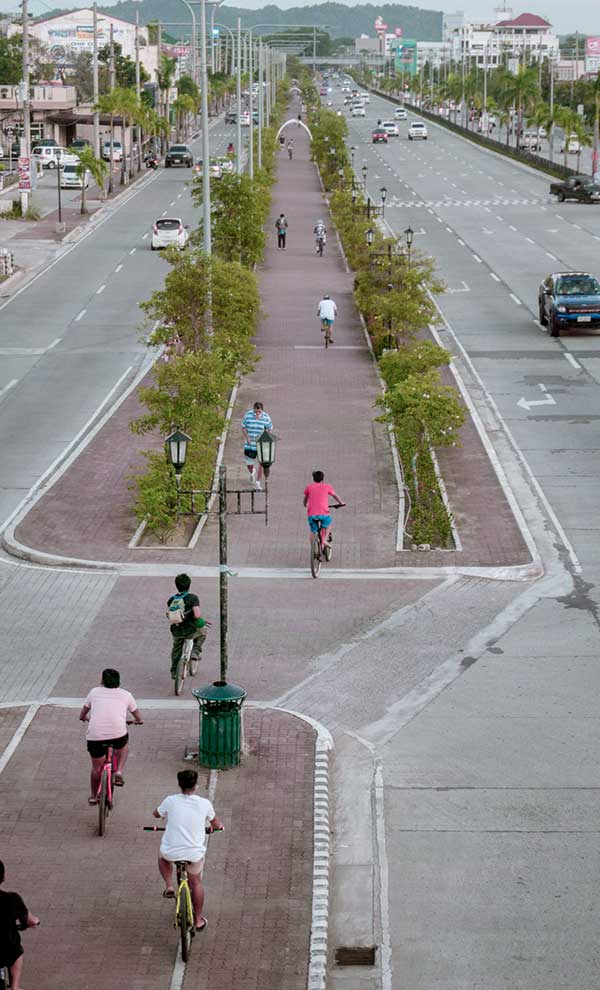 Atty. Carillo, Chairman of SUGBO Bike Lanes Board states that, “We need more cities to prioritize better mobility for people who do not own cars. It is important to emphasize that bicycle and pedestrian lanes are important so that more people can have better access to services.

Arch. Ann Cuizon, Board Member of SUGBO Bike Lanes Board further adds that, “There are many benefits in having a bike lane network, it is a good opportunity for us to establish a movement for those who want other options in terms of traveling and going around the city that is actually safer and sustainable. When Cebu City decided to go for this initiative it is really because we wanted to have a balanced mobility in the city where people have multiple options in going around the city.”

“We hope to complete the bicycle lane network and go in the process of evaluating in the years after to see where we can really improve and where we can still expand.”

Introduced in 2020 by the Institute for Climate and Sustainable Cities (ICSC) along with various partner organizations like The Climate Reality Project Philippines, MNL Moves, 350.org Pilipinas, and Pinay Bike Commuter Community, the Mobility Awards recognizes acts of leadership by Philippine local governments, workplaces and commercial establishments to promote cycling as a reliable, efficient and sustainable mode of transport among their constituencies, customers, employees, and communities.

Mobility Awards national convenor Celine Tabinga hopes that the successes of the Top 3 cities would inspire other cities and municipalities in the Philippines to put up interconnected bicycle lanes in their respective localities, and to give priority to active mobility among their citizens.

“We welcome cities that are cycling towards a better, healthier, and cleaner future. We challenge cities to move people towards a more progressive future that puts people’s mobility, especially the car-less and the most vulnerable at the center… The winning cities are demonstrating leadership towards a more progressive Iloilo, Mandaue, and Naga. And just like cycling, we challenge them to pedal forward. For 2022, we call on cities to take the challenge, and be more bikeable and walkable,” she said.

Tabinga, together with Paula Bernasor of the Climate Reality Project, and Golda Hilario, the Urban Transitions Lead of the ICSC, led the awarding for these three cities.

According to the organizers, the 2022 Mobility Awards will include cities in NCR and incorporate pedestrian-friendly measures in the selection criteria. For more information, visit mobilityawards.ph.