This was revealed by Jocelyn Ladero, deputy director of BSP Bacolod branch during the Regional Roadshow on Philippine Currencies and Other BSP-Related Advocacies at BSP Multi-Purpose Hall here yesterday.

Ladero said that 2,000 pieces of 1,000 peso polymer banknotes were released to banks for training and familiarization. “These are just very, very limited,” she added.

Ladero said these were part of the 10 million pieces that was initially released on April for circulation in the country. 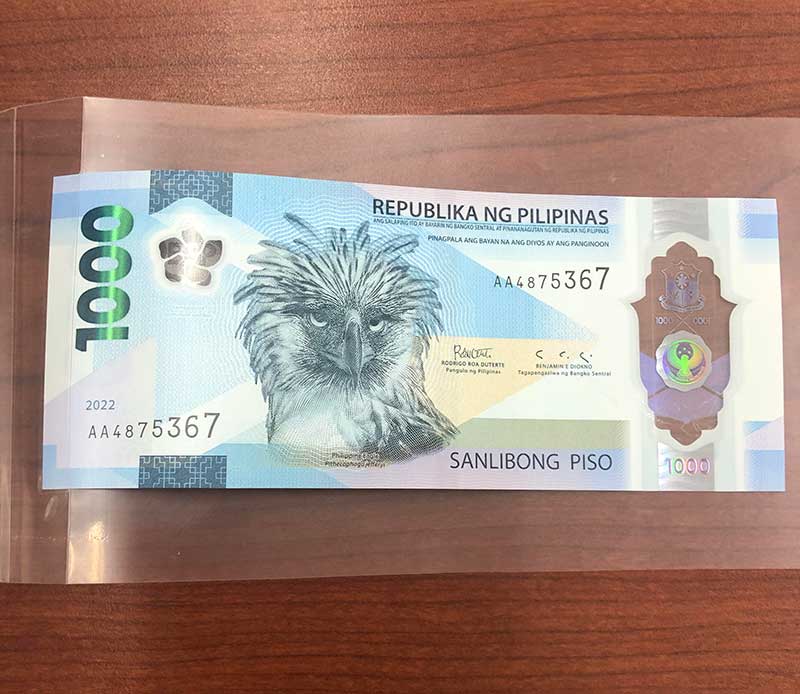 The delivery of the remaining 490 million pieces of polymer banknotes will be from October 2022 to June 2023.

During the initial phase, Automated Teller Machines (ATMs) and other cash processing machines will be calibrated to properly count and dispense the new 1000-peso banknotes.

Despite the expected circulation of the new 1000-peso paper banknote, the BSP noted that there will be no demonetization of the current banknotes and coins, as of now.

The BSP introduced the polymer banknotes, for these reasons: Since the start of the coronavirus disease 2019 (COVID-19) pandemic, sanitizing frequently touched objects, including banknotes and coins, has become a widespread need; While the Philippines does not have a major counterfeiting problem, crime syndicates keep improving their techniques in counterfeiting the New Generation Currency banknotes that are currently in circulation; and Given the increasing scarcity of water, energy, and other inputs, our banknotes should be made to last longer and be fully recyclable, considering both environmental sustainability and cost-effectiveness.

The BSP believed that these concerns can be addressed by using the polymer substrate in banknotes, which is known worldwide to be more durable, cost-effective, hygienic, difficult to counterfeit, and sustainable.

The BSP also noted that they would only need to print polymer banknotes in amounts equal to a third or up to half the number of paper banknotes which only last about 1.5 years on average. This will lead to significant savings in printing costs.

Prior to release, the BSP conducted technical briefings for bank personnel, machine suppliers, and cash-in-transit service providers to educate them on the design and security features of the polymer banknotes.

The BSP advises the public that the new 1000-peso polymer banknote is only worth its face value and should not be sold, traded, or bought for any other amount.

But with the security features of the polymer banknotes, Baccay said that it would be hard for it to be counterfeited.

The 1000-peso polymer banknote features the Philippine Eagle, which is one of the world’s most powerful birds of prey and is native to the Philippines. As such, it is a source of national pride and identity.

It depicts the strength and love for freedom of Filipinos, as well as independence and a clear vision of the BSP to help achieve a better and more inclusive economy.

As for the flora and fauna theme, it demonstrates the pride and distinction as Filipinos.

Baccay said the first polymer 1000-peso banknote is just for test circulation as they are still studying its effect or result.

“We are a tropical country, medyo mainit sa Philippines, and may wet market pa, but if it’s acceptable, and it passes the environmental concerns, we can perhaps consider other denomination to become polymer,” Baccay said.

Baccay said the idea of polymer banknotes even came before the pandemic. “Medyo nahuli lang si Philippines because of some health concerns,” he added.

December 9, 2022 0
Ripple Labs is a company focusing on easy and cheap payments all around the world and is used by financial establishments, businesses and banks....

Hidilyn Diaz lifts her way to a golden hat trick in...